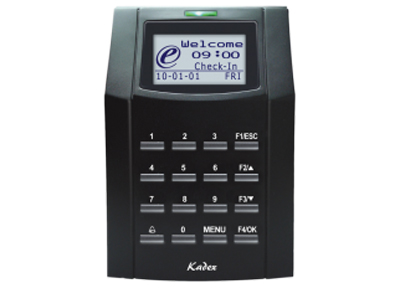 The FingerTec® Kadex access control & time attendance card reader supports card ID, 5-digit password, or a combination of both. The Kadex terminal integrates with your security alarm system to alert users in case of break-in or duress. The terminal can also interface with your fire alarm system to unlock all doors when the alarm is triggered. Kadex communicates with computers via TCP/IP and its USB flash disk drive eliminates extra wiring and provides a secure option in case of failed connections.

m-Kadex is a simplified version of Kadex, with similar functionality, but without the keyboard and LCD. All m-Kadex functions are controlled through software except for enrolling and deleting card users, which can be performed directly at the terminal using an administrator's card.

i-Kadex is a slave reader which complements Kadex and m-Kadex for professional access control functions. i-Kadex reads the popular Wiegand protocol and is waterproof and dustproof (IP65) for long life as an access control device.